Chlorine dioxide is currently the most effective disinfectant, even for demanding applications. The use of chlorine dioxide ensures the correct level of purity in drinking water – and there is one particularly noteworthy feature of this type of disinfection – it has the “ability” to remain in the plumbing system for a long time, which means that the water can be actively disinfected, even without being tapped.

Chlorine dioxide can even deal with such a demanding “enemy” as legionella.

It is much more effective than chlorine, has a longer-lasting effect, and does not cause toxins or typical chlorine odor.

With this method it is produced on the basis of hydrochloric acid and sodium chlorite solution (both substances – in dissolved form).

The chlorine dioxide produced by Oxiperm® Pro is then stored in a tank and dosed into the water. The dosing is carried out according to current needs and in such a proportion as to ensure optimum safety of the disinfected water.

Developed by the market leader in water treatment, Grundfos, the Oxiperm Pro OCD-162 stands for reliability, easy installation and operation, and high efficiency. The Oxiperm Pro OCD-162 is a modern chlorine dioxide generator, recommended for all applications that require constant monitoring and control of dangerous microorganisms in drinking water (including legionella). 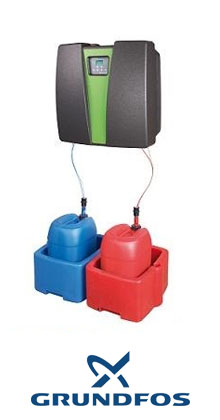 The Oxiperm Pro OCD-162 is available in four versions, the highest capacity of which can treat up to 150 m³ of drinking water per hour (with a maximum permissible ClO2 concentration of 0.4 mg/l – for more information, see Grundfos services).

The Grundfos chlorine dioxide generator offered by us is distinguished by: simple and compact design (thanks to which it can successfully operate even in small spaces); low operating costs; reliability (e.g. through the use of efficient controllers); and versatility.

As mentioned in the introduction, generators are particularly suitable for installations where disinfection is not carried out continuously.

The use of Oxiperm Pro systems means, among others, maximum protection against bacteria, such as legionella, and appropriate treatment of water used for irrigation, process water (industry, including food industry) or cooling water.

We have mentioned legionella many times, in this and other texts. For good reason. Legionella pneumophila is an extremely dangerous bacterium, occurring in dozens of varieties – some of them are very dangerous to life and health.

It can be especially dangerous when people who are struggling with respiratory illnesses, chronically ill people, those with compromised immune systems, and seniors are exposed to it.

As a result, since January 1, 2008, relevant regulations have been in force, requiring tests to be carried out (for the possibility of Legionella occurrence) in hot water, in collective residence buildings and in closed health care facilities.

Legionella thrives under favorable conditions, and such can be found mainly in warm water (especially from 30 to 50°C.) and with low flow dynamics. The places where water is retained can be problematic, as numerous studies have shown that legionella can also develop in equipment that is not properly operated and maintained (among others, rust promotes its development).

In order to avoid the risk of Legionella, special care should be taken of the following: water installations through which hot water flows, shower and tap water installations, air conditioners, steam generating devices, swimming pools, including those used in SPA and other such devices (e.g. Jacuzzi).

Granimex offers the most modern chlorine dioxide generators from the extensive Grundfos collection. We provide professional consulting, equipment selection and installation, as well as service.